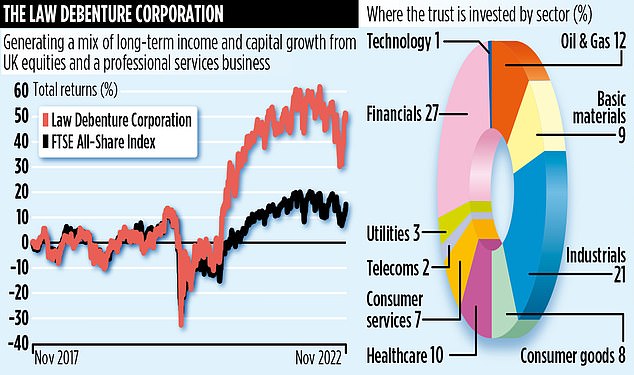 Although there is an element of ‘law’ to the trust’s portfolio, the £964m fund is primarily a vehicle that seeks to deliver an attractive dividend stream to shareholders – plus a dollop of capital return in addition. This is what is commonly known as an equity income investment trust in the UK.

This is an investment objective that Law Debenture has fulfilled quite effectively in recent times. Over the past 12 years, it has provided investors with growing income – and despite the tough economic times, it looks set to become 13 when the final two quarterly payments are made for the current fiscal year.

“It would surprise me if the annual dividend weren’t up again,” says Laura Foll, who manages the trust’s equity portfolio with James Henderson (both work for UK asset manager Janus Henderson).

So far this financial year, the trust has paid first-half dividends of 14.5 pence per share, up from 13.75 pence last year. Income payments equate to an annual income of around 4.8 percent. In terms of overall returns – capital plus income – the trust has also delivered, especially relative to its peers.

Over the past five years it has generated a total return of 55%, better than any other UK listed trust.

Over the past year it is only one of six to have generated a positive return – the others being The City of London (also managed by Janus Henderson); Merchants (Allianz); Temple Bar (Red Wheel); and Edinburgh (Liontrust) and Shires (Abrn).

Law Debenture’s assets are divided into two distinct silos. The first, representing the ‘law’ element, is an unlisted international company called Independent Professional Services. It makes money by providing trust services to pension funds and corporations, as well as offering other business services.

Currently, it represents about one-fifth of the trust’s assets, but provides one-third of the income which is passed on to shareholders in the form of dividends. The remaining 80% of assets are made up of 150 holdings managed by Foll and Henderson, most with a history of generating dividends. 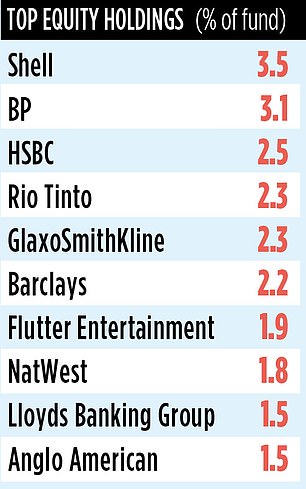 “Since the trust holds 20% of its assets in one holding,” Foll says, “it’s important to diversify the rest of it.” The result is a low-conviction portfolio, with the largest positions no larger than 3.5%.

These are blue chip companies known for their dividends, such as Shell and BP. With the IPS business generating a good portion of the revenue, the two managers are able to invest some of the trust’s assets in companies that currently offer little dividends, but the prospect of healthy payouts in the future.

Entertainment company Flutter, which currently does not pay a dividend, is in the top ten holdings while managers have increased its stake in manufacturer Morgan Advanced Materials. Morgan has significantly increased its interim dividend for the current fiscal year and recently said earnings for the year will come in at the top of analysts’ forecasts.

Foll believes the UK stock market, particularly outside the FTSE100, has already priced in the likelihood of a recession and lower corporate earnings. Historically, she says, that seems cheap.

The Trust’s stock market identification code is 3142921 and the symbol LWDB. The ongoing annual fee is low at 0.48%.

Some links in this article may be affiliate links. If you click on it, we may earn a small commission. This helps us fund This Is Money and keep it free to use. We do not write articles to promote products. We do not allow any business relationship to affect our editorial independence.