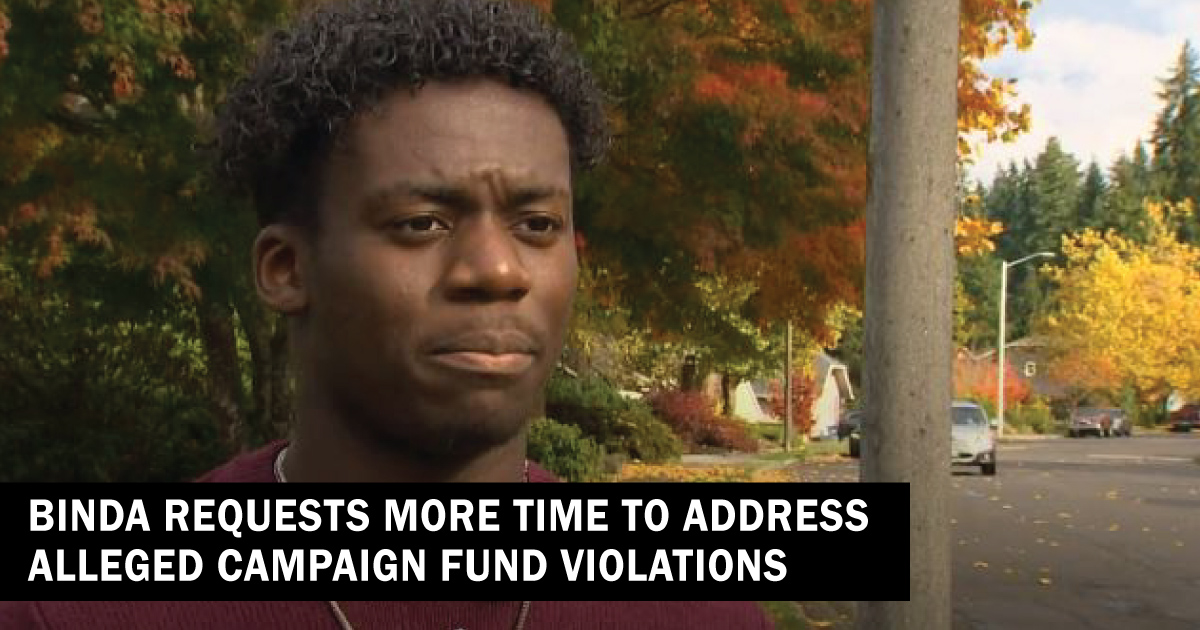 In a Nov. 22 email to the PDC that was sent just hours before the 14-day deadline to respond to the second compliant case filed on Nov. 8, Binda asks the PDC to provide a “filing assistant” as it is ” very new to all of this and could use help for both.

“Thank you for your email and I look forward to continuing to work and cooperate with the PDC,” Binda wrote in the email to the PDC. “I am requesting more time as I will be making a further modification to my PDC to ensure it is described as accurately as possible. I would like a Filer Support Specialist to continue to help me with the process, as I am very new to all of this and could use the help either way! Thank you very much and looking forward to hearing from you.

The Binda campaign emailed its response to the PDC less than two hours after the Lynnwood Times contacted Binda asking for an official statement asking if he intended to speak to the two cases opened for alleged violations Washington’s campaign finance and disclosure laws (RCW 42.17A) and the rules (WAC 390) against the Elu Joshua Binda campaign.

Allegation of misappropriation of campaign funds

The Lynnwood Times first reported that Lynnwood City Council candidate Joshua Binda, 21, had recorded nearly $ 4,848.19 in expenses for rent, towing costs, concert tickets, jewelry, laptops, etc. airline tickets, groceries, dental care, haircuts and office furniture. In addition to these suspicious expenses, an additional $ 4,952.12 was grouped together and recorded as “expenses of $ 50 or less”.

In a second Times article as part of the ongoing investigation into $ 10,000 of suspicious campaign expenses reported by the Elect Joshua Binda campaign, it was reported that no vouchers, receipts or bank statements were provided and that 19 changes to the PDC documents were made after the Lynnwood Times requested a public inspection of the Éliser Joshua Binda campaign books in accordance with Washington State law (RCW 42.17A.235).

Binda said in meeting with The Times that he confused his campaign debit card with his personal debit card, stating that they looked the same, as the reason for some non-campaign expenses, such as a plane ticket and concert tickets. He also shared with the Lynnwood Times that he gave a “campaign volunteer” access to the campaign debit card that the volunteer was using for non-campaign expenses.

According to the PDC Campaign Reports database, Binda contributed $ 2,943.39 to his campaign, up from $ 967.89 before the Lynnwood Times telephone interview with him on October 30. In changes to contribution reports submitted on October 31 and November 1, Binda approved $ 3,777.51 of increased campaign contributions not previously reported to the PDC, possibly concealing campaign contributions from public disclosure in violation. of RCW 42.17A.235 and RCW 42.17A.240.

According to the PDC Campaign Reports Database, Joshua Binda signed a net cut of $ 4,572.61 affecting 16 previously recorded expenses for his campaign after the Lynnwood Times’ Oct. 30 request to publicly inspect campaign books by Elect Joshua Binda. Between October 31 and November 1, seven amendments to the expense reports were submitted by Binda, possibly concealing or diverting campaign expenses from public disclosure in violation of the RCW 42.17A.235 and RCW 42.17A.240.

For a detailed breakdown of the 19 changes to Binda’s PDC documents, click here.

Application of the PDC

There is currently two cases opened for alleged violations Washington’s campaign finance and disclosure laws (RCW 42.17A) and the rules (WAC 390) against the Elu Joshua Binda campaign.

The existing complaints allege the theft or embezzlement of campaign funds for personal gain (RCW 42.17A.445 and WAC 390-16-238) and concealment of expenses (RCW 42.17A.235 and RCW 42.17A.240). One violation of RCW 42.17A.235.6.a is currently ongoing for failing to meet publicly within the 48 hour period required to publicly inspect campaign books, and another for failing to provide required source documents, as required by Washington State Law WAC 390-16. -043 (6). Additional offenses for concealment of contributions may be filed as of Monday, November 8.

When asked to execution processPDC deputy director Kim Bradford told the Lynnwood Times that within the first 10 days of a complaint, PDC staff review the validity of the violation complaint. If there is enough information to support an allegation, a case is opened (posted on the website) and the defendant has 14 days to deal with the complaint. Staff will then review the respondent’s response and take appropriate action.

Bradford explained that most cases are resolved within 90 days administratively through a reminder, warning or statement of agreement in which the respondent admits a violation and pays a penalty.

However, for allegations that require investigation, a formal investigation is initiated and may take months to resolve. The PDC has the power to subpoena to obtain bank documents and other source documents to aid it in its investigation.

Complaints that are formally investigated may lead to possible enforcement action. When and how this happens depends on the outcome of the investigation and whether an investigation reveals evidence of a material violation of any laws or rules enforced by the PDC. If a stipulation or settlement is not met, PDC staff may issue an administrative charge notice and classify the matter before the commission as a matter of execution in accordance with the Administrative Procedures Act.

Washington state law allows plaintiffs to sue on behalf of the state if the PDC or the attorney general’s office fails to act. If the PDC has not resolved a complaint, referred the case to the Attorney General’s office, or opened a formal investigation and held a first hearing within 90 days of filing a complaint, complainants can file 10 minutes’ notice. days indicating their intention to go to court.

The swearing-in ceremony for all newly elected members of Lynnwood City Council is scheduled for December 13. The newly elected representatives will be responsible for a municipal budget of over $ 465 million.